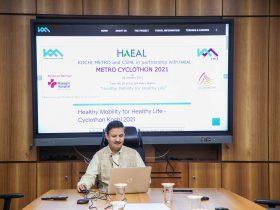 The state government has promoted Alkesh Kumar Sharma IAS to the post of Additional Chief Secretary to the Government of Kerala.

The state has declared the post of MD Kochi Metro Rail Limited as equivalent in status and responsibility to Additional Chief Secretary (ACS) and has ordered to post Shri Sharma there. He is the first to be promoted as ACS from the latest  list of officers empanelled  by the Government of Kerala.

He joined KMRL as the MD on September 27th, 2019. Alkesh Kumar Sharma, a 1990 batch official was the CEO & MD of the prestigious Delhi–Mumbai Industrial Corridor Project (DMIC) industrial development project , one of the major and comprehensive infrastructure projects in the World.